World leaders have gathered at the United Nations Climate Change Conference (COP26) this week to announce targets and standards to combat climate change.

Meanwhile, back in Canada, the oil and gas sector continues to demonstrate its ability to innovate and diversify operations to improve performance and reduce environmental impacts. Here are a few projects to watch:

DEEP Earth Energy (DEEP) and Prairie Lithium have announced an agreement to exchange mineral permits in an effort to advance development of two clean energy resources in southeast Saskatchewan: lithium and geothermal.

Lithium is driving the battery storage market. Not only do lithium-ion batteries power most smartphones, they are also at the center of the clean energy transition with uses from electric vehicles to large-scale utility storage solutions.

These mutually beneficial initiatives represent the future of responsible energy development, collaboration, and innovation by developing multiple resources from a single project.

Pembina and TC Energy announced a joint plan to develop a carbon transportation and sequestration system capable of transporting 20 million tonnes of carbon dioxide captured by third parties annually, the equivalent of taking over four million cars off the road each year.

Existing pipeline systems will be retrofitted along with a few new builds and gathering systems to connect the oil sands to a sequestration hub in central Alberta. The use of existing assets is expected to accelerate project timing and reduce cumulative environmental and community impacts.

Initial studies of the selected reservoir show that it will be capable of sequestering more than two trillion tonnes of carbon dioxide.

The Alberta Carbon Grid is expected to be a solution offering many sectors expanded emissions reductions based on its connections to multiple industrial hubs.

Pembina and TC Energy are targeting the first phase to be operational as early as 2025.

Through the company’s recent investment in Canadian Utilities Limited, ATCO will build two solar installations in Calgary and further diversify its energy portfolio.

Together, the combined Deerfoot and Barlow solar projects will hold 175,000 solar panels, covering the equivalent of 170 Canadian football fields, generating enough renewable electricity to power more than 18,000 homes and offset 68,000 tonnes of carbon per year. 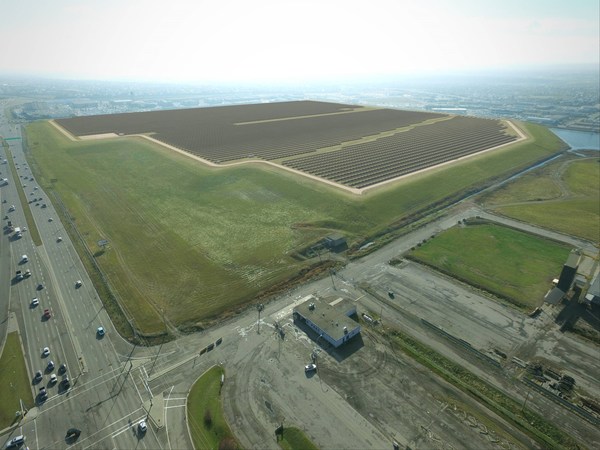 An artist’s rendition of the ATCO Group’s Barlow solar project to be built at the corner of Barlow Trail and 114 Avenue SE in Calgary. Photo courtesy ATCO Group

Royal Helium has commenced drilling its first helium well in southeastern Saskatchewan, the first program of its kind in the area.

Helium cannot be replaced in many of its uses, some of which include cryogenic applications – the cooling of superconducting magnets in MRIs, leak detection for rocket propulsion systems (NASA), deep sea diving gases, and a party favourite: balloons.

Drilling for helium is nearly identical to the process of drilling for natural gas, allowing for the transfer of knowledge from the oil and gas industry, and benefitting from an abundance of idle rigs in North America.

TC Energy has joined forces with Nikola to develop large-scale hydrogen production hubs in Canada and the U.S. to deliver low-cost and low-carbon hydrogen for long-haul trucking.

The companies intend to accelerate the adoption of heavy-duty zero-emission fuel cell vehicles (FCEVs) and hydrogen across industrial sectors by establishing hubs in key geographic locations.

The collaboration aims for the hubs to produce at least 150 tonnes of hydrogen per day near highly travelled corridors. This will serve Nikola’s planned need for hydrogen to fuel its FCEVs within the next five years.

TC Energy will leverage existing pipeline, storage, and power assets to lower the cost and increase speed of delivery. These assets may also be used to deliver carbon dioxide to sequestration sites, decarbonizing the hydrogen production process.